New Delhi, July 16 (ANI): Experts and leaders, on Wednesday welcomed the setting up of $100 billion BRICS bank and a currency reserve pool aimed at reshaping the Western-dominated international financial system. Leaders of the five top emerging markets in BRICS nations consisting of Brazil, Russia, India, China and South Africa, sealed the deal to foster financial and development cooperation and keep the monetary tap running in the face of a financial meltdown like the 2008 crisis. A senior researcher at the New Delhi-based Observer Research Foundation think-tank, Samir Saran, said bank would help emerging and developing nations to mobilize resources for infrastructure and development projects. BJP leader Subramanian Swamy, welcomed the setting up of the bank, adding that the previous Congress -led government had committed to the Chinese demand to have the bank being headquarted in Shanghai 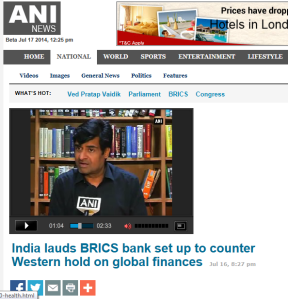