In a significant act of political signaling and foresight, Chinese Premier Li Keqiang chose India as his first ever overseas destination after taking charge of the premiership.

This visit is important in more ways than one. At the purely bilateral level, an excruciating border episode was just recently brought to a close.

On a global level, the two countries are dealing with a once-in-a-century churning in the architecture of global governance, while at the same time trying to shake of the lethargy that both economies have fallen prey to.

For the first time in many centuries, this continent has the wherewithal to define itself on its own terms. Capitals in Asia will lead the process of shaping the Asian project.

China and India must be partners in this effort, and to get there they need to deal with the hard questions, as the time for sweet talk is now over.

We need to start having brutally frank conversations on our legacy problems and on the more recent challenges.

The parroting of old staid positions and whispering of diplomatic sweet nothings will yield little and allow others to intervene and impose.

It is time for the two countries to grow up and resolve the disputed border. And even as this resolution is discovered, progress on the bilateral relationship must be insulated from this process.

For this to happen, political leadership in both countries will have to demonstrate courage to make their respective security establishments toe the line.

Economic integration is not and will never be the answer to this political poser alone. It can provide the motivation for seeking a resolution, but it is not the answer by itself.

In fact, it can now be argued that the political discord and public perception in both countries are limiting greater economic integration.

Trade shows signs of plateauing, with Chinese firms struggling for access to all projects in India, be they shipyards, roads or telecommunications, despite some early and spectacular inroads.

The two countries now need to realize that they are confronted with the political moment that has been deferred and delayed but cannot be denied. Strong and purposeful measures must be crafted.

There must be a bold statement on the border issue that no matter what the differences, incidents like that in Ladakh recently will not happen again.

While the border management pact recently offered by China may not be the answer, an equitable arrangement that prevents any troop movements remotely close to each other’s claimed territory must be worked upon.

This conversation cannot be delayed. And the process of arriving at this accord needs to be a lot more transparent. Opaque political discussions lead nowhere, and public opinion must be built and sought.

China’s engagement with India must transform from one that is largely seen as transactional, such as the selling and buying of goods and commodities, and more recently functioning as a lender, to one of being a long-term investor and stakeholder in the Indian economy.

Chinese money, businesses and investments must bet on India and be located in this country.

This cannot happen however until businesses and people in China begin to perceive India as a friendly destination, an outcome equally determined by Indian attitudes to China.

India for its part must seriously consider identifying special industrial zones that Chinese firms can develop as centers of large manufacturing and R&D.

There must be a complete, honest and meaningful revamp of the current visa regime. The level of visits is abysmal, and security considerations cannot determine the level of engagement between the two countries destined to be the largest trading partners in a decade or so.

Finally, the two must bilaterally develop a substantial conversation on the cutting edge of global governance issues, including issues of the global commons like climate change, water, health and medicine, and Asian security architecture, as well as issues of space and proliferation, of rules and mechanisms of economic governance, and on new arenas of maritime and ocean governance.

This dialogue must help discover common ground that the two countries can articulate and put forth for the consideration of the global community.

Such articulation will be the first step toward an Asian century. Ultimately a political Asia will be born when New Delhi and Beijing can assume parentage of this Asian geography that until now has only seen many guardians.

Samir Saran is a vice president and Abhijit Iyer-Mitra a program coordinator at the Observer Research Foundation, New Delhi. opinion@globaltimes.com.cn 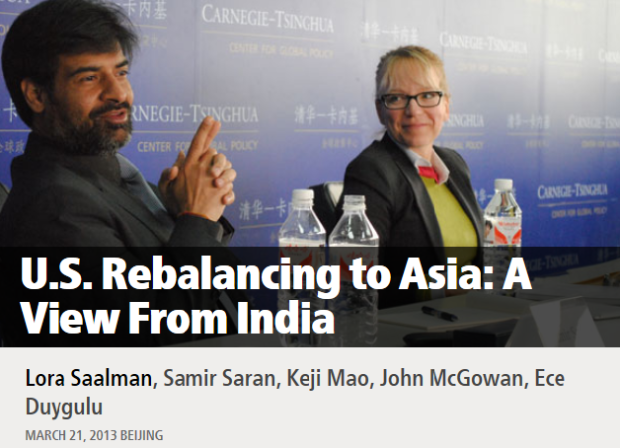 Faced with the limitations of economic relations without political integration, Asian states have begun to reevaluate their prior relations and coalition structures to meet the demands imposed by U.S. rebalancing within Asia. Nowhere is truer than in the nuclear arena, where China, India, and the United States face questions over their ability to redefine their partnerships and the global nuclear order. Samir Saran, vice president and senior researcher at the Observer Research Foundation in New Delhi, spoke in the twentieth session of the “China-South Asia Dialogues” seminar series for senior experts. This was followed by presentations by three Tsinghua University master’s degree students: Mao Keji from China, John McGowan from the United States, and Ece Duygulu from Turkey. The students’ presentations were part of the “China and South Asia’s Future” seminar series for rising scholars. Carnegie’s Lora Saalman moderated.

Saran noted that while the United States is often seen as rebalancing “to” Asia, much of this reorientation has actually occurred “within” Asia. Even as Washington seeks to redefine the role that it will play, regional powers have begun to delineate their own identity, he asserted. In doing so, economic integration has begun to “reach its limits” in the face of unresolved political tensions and obstacles. Without addressing political integration and rebalancing among regional players, Saran suggested that an integration project designed and implemented by Asians themselves would be difficult to achieve.

Saran asserted that one of the driving motives behind U.S. rebalancing within Asia has been China’s reluctance to enter into a G2 construct, under which Washington and Beijing would serve as the primary players. Rather than resulting in comity or competition in a bipolar order, Beijing and Washington are both jockeying for their own national interests, said Saran. However, he added, the United States maintains a strong isolationist streak that could result in significant drawdowns in how it engages the region and guarantees its security. In the face of this uncertainty, Saran maintained that regional players would be best served by coordinated political integration fashioned by capitals in the region.

The futures of China and India are inextricably linked, Saran said. Chinese refusal to sign onto the bilateral U.S.-China agenda, coupled with the fact that Washington has already made its unsuccessful play for a G2 construct, means that Beijing is in the driver’s seat. As a result, he maintained that the U.S. pivot to Asia will ironically be “made in China.” In looking further afield for energy stores and cooperation, Beijing and New Delhi will also be faced with the need to guarantee passage throughout the Indo-Pacific, Saran added. Beyond the bilateral, he noted that engagement at multilateral forums has proven to be most viable for China and India, since it obviates confronting mutual tensions. Enhancing Cooperation

Saran noted that preoccupation with traditional security misses the economic fallout and necessity of integrating political, economic, and military solutions, particularly when faced with new territorial disputes, piracy, drug running, and other asymmetrical threats. To this end, Saran asserted that India has a role to play. However, when it comes to territorial disputes in the East China Sea and South China Sea, he remained reluctant to predict a role for New Delhi. When asked about ties between New Delhi and Tokyo by one of the Chinese participants, Saran responded that Japan and India have similar interests, which become all the more evident in the context of China’s regional rise.

One of the Chinese participants spoke of allegations of China’s aggressiveness when it comes to its neighbors and suggested that this was tied to internal shifts in how China defines itself. He questioned whether India is undergoing a similar case of self-reevaluation. Saran responded that part of Beijing’s crisis of perception comes from the fact that despite its growth and creation of regional dependencies through donations and economic benevolence to its surrounding countries, it has not changed its behavior towards these countries. Similarly, given New Delhi’s growth, it seeks accommodation on its desire to be a “global manager.” Unlike China, however, he noted that India has global aspirations, but continues to be bogged down by domestic issues. A Chinese expert added that he felt China and India have more in common with each other than with the United States, advocating increased interaction and exchange to build strategic mutual trust.

A Chinese participant queried what measures would increase China’s respect for and willingness to cooperate with India. Saran responded that people-to-people contact, expanded media interaction, and investments leading to greater integration between Beijing and Delhi on all levels are key. Mao, McGowan, and Duygulu offered their takes on how this dynamic has played out in the nuclear sphere, with India’s pursuit of a nuclear capability to solidify its status and respect from countries such as China. A Chinese expert noted that when it comes to multilaterally binding arms control treaties, India still has a role to play, particularly with the Comprehensive Test-Ban Treaty (CTBT). Saran responded that trust must be mutual; as such, India’s signing of treaties like the CTBT will be dependent upon the actions of China and its decision whether or not to ratify them.

Much like “China’s Dream,” Saran cited “India’s Promise,” asserting that Beijing is waking up to New Delhi’s potential over the next ten to fifteen years. However, he cautioned that while demographic windfalls may shore up India’s production capacity in the short term, they are likely to pressure New Delhi to meet the employment demands of a young and disenfranchised population. As these numbers soar, Saran further predicted that the long-term implications of caring for the elderly would threaten the sustainability of India’s economic growth. Despite such pressures and the recent decline in Sino-Indian trade, Saran maintained that the two countries share common aspirations and challenges. More than simply reacting to U.S. rebalancing within Asia, Beijing and New Delhi should conduct their own regional recalibration, Saran concluded.