It seems that the greatest celebration of India – its democracy and the much-feted elections – also bring out the absurd in us all.

As the five states of Delhi, Madhya Pradesh, Chhattisgarh, Rajasthan and Mizoram go to the polls in the coming weeks, it seems the ‘silly season’ is upon us. We are being saturated with inanities masquerading as “political discourse”.

The problem, however, is that as these samples of ludicrousness tumble out in a disturbingly steady stream, we actually engage with them in earnestness.

BJP workers wear masks of the party’s PM candidate Narendra Modi, who is presently spoken of in the manner of a superhero.

Let us therefore first propose a toast to the Indian National Congress and its brilliant and original idea of banning opinion polls on the grounds that these are unfair and influence voters.

Now, in any normal society – leave alone democracy – this would be considered a misguided attempt at humour by a geriatric who has crossed the threshold from dotage to anecdotage. But evidently in India it is taken seriously enough to merit furious (and serious) discussion on talk shows and much scholarly debate on the subject in the online, visual and print media.

Heck! Why stop at opinion polls? The logic that these polls unfairly influence voters can equally be extended to op-eds, reporting, and indeed to the very application of one’s mind. So why not go ahead and ban people from thinking for the next 6 months?

After all, it can be stated with a great deal of medical and sociological certainty that the application of one’s mind creates a capacity within the individual to actually decide his or her fate, as opposed to being a force-fed farm animal that gets shepherded into an abattoir.

Would Sonia Gandhi’s Congress prefer voters to go to the polls blind-folded, lest their genuine opinions affect the vote? 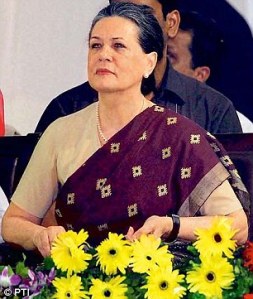 In fact, in order to extend wholehearted support to the Congress’ proposals we should take the logical next step of blindfolding the Indian voter before they press the EVM button – so that the voting process can become a lucky draw – truly free of undue influence and bias.

Of course there is the danger that our hallowed Electoral Commission – the so-called protector of India’s freedom and democracy – might actually embrace this fruit-loop scheme.

So let us raise the second toast to the monumental silliness of the Election Commission of India, now rapidly on its way to becoming a much-loved and celebrated ‘law unto itself’.

In its notification dated the 25th of October – “Instructions with respect to the use of Social Media in Election Campaigning” – the EC has made the terminal mistake of assuming that social media is like every other media that has come before it, claiming “since social media websites are also electronic media by definition…”.

While this betrays a deeply flawed, almost astoundingly naive view of the dynamic and deeply democratic cyber-sphere, at a more serious level this has dangerous overtones of the Sippenhaft laws from Nazi Germany.

Basically any candidate can lodge a complaint against any individual Tweet or Facebook comment based on the fact that they can be “reasonably connected with the election campaigning of political parties and candidates”.

This is guilt by association of the worst possible kind, because now any sympathiser, relative or associate of any candidate effectively has his or her freedom of expression curtailed on the basis of specious reasoning that this can be traced back or connected with a political party.

So much for the Election Commission being the guarantor of India’s democracy! It is sad that this body, overwhelmed by this deluge of election-season silliness, has become the epitome of silliness itself.

Indeed, if the EC is so serious about this regulatory order, it should assume charge of the Ministry of Communications and Information Technology as well as the Ministry of Information and Broadcasting, to avoid any hint of bias on the part of the two wings of the government.

The third toast in this autumn of silliness is reserved for the BJP, its Prime Ministerial aspirant and their rather “unique” take on Indian history.

I am yet to find where Alexander ever set his eyes on the Ganges, I am yet to find anyone named Chandragupta Maurya belonging to the Gupta Dynasty, and Taxila – as far as my maps show me – is part of Pakistan not Bihar – though presumably in some warped version of ‘Akhand Bharat’, northern Punjab may in fact be annexed to the penurious ruin that is Bihar.

Of course logic would have demanded that the head of a speechwriter roll, or the entire research team be put out to pasture. What we see instead is a bunch of experts finding ways to somehow discover coincidence between history and the recent remarks of the BJP’s PM-in-waiting. But perhaps the victor does script history – and let us toast to that possibility.

Despite what they all say; despite the INC’s moral indignation, the EC’s delusions of infallibility and the BJP’s historical certitude, they all think of us – the Indian people – as livestock, incapable of discerning chaff from wheat and deciding for ourselves.

If India chooses to take these people seriously, we really do need to ban any outlets of independent expression and go back to the happy days of black-and-white Doordarshan with programming restricted to Krishidarshan and Zara Sochiye (as relevant today as they were then), because as it turns out the greatest fools are the people who tolerate – nay celebrate, revel in and vote for – such silliness. It is to them the fourth and last toast should be raised.

I say, this season let us all get sillier still, and put our finger on ‘NOTA’.