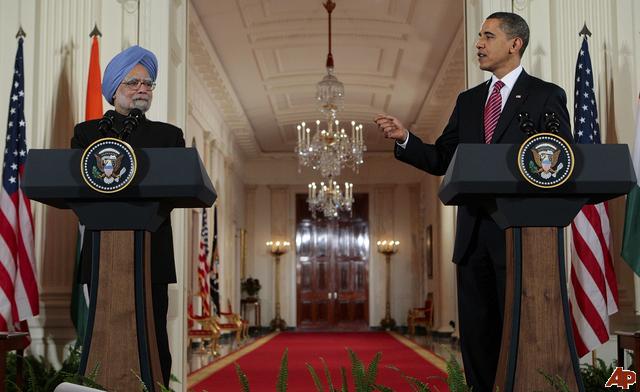 by Samir Saran and Dr. John C. Hulsman
8th of November 2012
Please find here the link to the original article

In his second administration, the form and contours of America’s ‘Asia Focus’ will be determined more by Asians than the U.S.

We live in an era that feeds off slogans and lives the clichés. For the Obama campaign it was the rallying cry “Forward.” And it seems that despite the ruminations of the pundits, who will complicate a straight line, the U.S. has given The President of the United States of America (POTUS) the mandate to march on, without the pressures of having to fight another election. The onus is now on President Obama to deliver on the many domestic challenges that confront his country and certainly on his vision for positioning the U.S. strongly in a rapidly changing world.

So far, the subtleties of the multipolar world — a place where America is a declining Chairman of the Board, beset by new board members with ever-growing market share — had not allowed for a bumper-sticker view of what was going on. Obama’s first term administration articulated its response to this new world in a verbal shorthand. Discussions on American foreign policy and grand strategy have been punctuated with the liberal use of terms like “Asia Pivot,” “Strategic Rebalance,” and “Asia Focus,” popularised by U.S. Defence Secretary Leon Panetta and Secretary of State Hillary Clinton. Attempts to truly decipher the underlying motivations of this new focus on the Indian and Pacific Oceans and what it means practically in policy terms have come to very little — in terms of U.S. force posture, budget (and cuts) and doctrinal shift. In other words, beyond the bumper sticker, what are we really talking about here? And how will this pan out in the second Obama administration?

LOOKING AT THE REGION

It must be clearly understood that the Asia Pivot or its various “avatars” do not signal greater U.S. engagement in and with Asia. It is a powerful historical fact that ever since the country emerged from being an isolated continental island, it has been fundamentally engaged with Asia. The U.S. has been a primary Asian Power since the dawn of the post-WWII world. Its strategic partnerships and security blanket in the western Pacific and in South-East Asia have underwritten the progress and stability of the region. It is undeniable that U.S. deployments, “East of the Suez,” in the 1960s, and in the Malacca Straits have secured trade routes, as well as the movement of energy and wealth that have benefited the Asian economies, just as much as it has helped preserve U.S. oil and market interests in the region.

So why the new slogan about America’s interest in Asia now? What does the U.S. seek to achieve? And how will this change the configuration of U.S. engagement in the region? The official American take on this subject reveals very little and certainly does not answer the pertinent strategic questions. But behind this apparent vacuum, something profound is happening.

First, the Asia pivot is all about transitioning from a world where a single great power reigned, to one where others ascend to great power status. By locking in new and old allies and strengthening its strategic position in the region, America hopes to cushion the blow of a relative global diminution in power. History is replete with examples of premier countries attempting to fight off growing rivals (Edwardian Britain and Wilhelmine Germany come to mind).

Washington is hoping to demonstrate strategic strength as a reassurance to allow for a peaceful realignment, wherein China continues to rise without its ascendancy provoking military conflict. As an American policymaker grandly stated, we are in the midst of a novel experiment where the only Hegemon is “allowing” the transfer of power peacefully (and grudgingly) to a newly-rising power. The only way this works is for basic American interests in the region to be reinforced.

Second, a lot of the “Asia pivot” narrative is about internal American discussions; it is as much a “call to action” allowing America to rouse itself, as it is a reaffirmation of commitment to its allies and new partners. Such a new strategy does away with the most indelible image of America in the new multipolar world, where it is often seen as “Uncertain Sam” or “The Reluctant Eagle.” The pivot to Asia serves as a rallying cry of decisiveness. It is also a blueprint for budget priorities, redeployments and a new and more efficient force architecture that the new administration will need to define given its campaign commitments.

Third, the pivot narrative is a comment on the changed dynamics of the Indian Ocean. Soon there will be the possibility of two or three new powerful navies (India, China and Indonesia) operating in the region. Doubtless, there will be new contests and competition for the role of commissioner of the seas.

Ranged against this, are declining American oil and natural gas interests in play as the coming fracking revolution in America itself allows for a dramatic new domestic growth in energy production. The Asia pivot at once answers why America should continue to care about what goes on in the rest of the world; America may not get its oil from Asia, but all the countries it finds itself interdependent with do. Thus, the Asia pivot sells continuing American engagement to a weary and economically overburdened American public. So, in the end, this is a bumper sticker that actually says something.

While all this may explain the American pivot, what is even more interesting is how the region itself will respond. For Asia is, but an artificial grouping of nations painted with one brushstroke. A unified character is indescribable and its evolution is characterised by a mosaic of individual national experiences or, at best, by developments of subregions like Asean.

Today, Asean in a seemingly chaotic manner has accommodated the U.S. as an Asian Power while at the same time economically aligning its path primarily with that of China and some other emerging centres. Asean has in many ways already learnt the fine art of using the U.S. as a strategic balancer; for example during recent Chinese assertiveness in the South China Sea, Asean drew the U.S. in as a very useful offshore balancer. Asean’s finely-calibrated balancing act is likely to continue.

In the short to medium term, India is a key to the “Pivot Paradigm.” For India, China is a natural neighbour. Difficult as the relationship may be, trade between the newly emerging economic giants will only increase, whatever the strategic pitfalls ahead. As the relative economic and political weight of China grows, it is the Indian response that could well befuddle most American planners. Proud of its “strategic autonomy,” the Indian reaction to the pivot will be an outcome of the Chinese approach to and engagement with India. Recent developments show that while China is keen to avoid pushing India to a place where a U.S. partnership seems reassuring, the new-found chauvinism and assertiveness emanating from Beijing is disturbing New Delhi.

Therefore, China itself will ironically determine the contours of the American pivot; the biggest game changer may well be the upcoming changing of guard in Beijing — the mood and demeanour of the new leadership led by Xi Jinping. Paradoxically, and the ultimate sign that we do live in a very different era from the preceding one of American dominance, the form and content of the U.S. pivot to Asia may be determined more by Asians than Americans. And this will test the skills and will of Obama 2.0.

Samir Saran is a vice-president at Observer Research Foundation and Dr. John C. Hulsman is the president of a strategic consultancy firm.