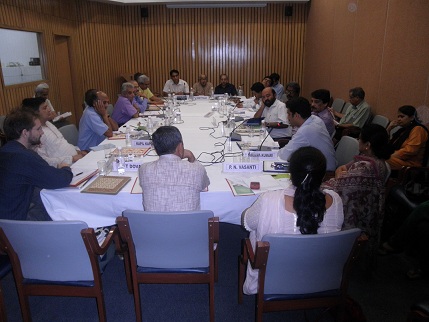 The primary objective of the session was to  exchange views and ideas among the leaders of Indian Think Tanks and their members. Besides this,  meet was also meant to know the problems and challenges before Indian Think Tank. It received overwhelming response from the capital’s  prominent  Research organisations,scholars and Think Tanks. The discussion was attended by thought leaders and representatives of various academic institutions, media, as well as former bureaucrats, fellows from the international bodies, and the representative of Think Tanks, like Observer Research Foundation(ORF), Institute of Dalit Studies etc.

The session was chaired by Prof. Rakesh Sinha Hon Director IPF and Prof. Shettigar, Chairperson ICPP and the discussion has started with the welcome note of Dr. Chaturvedi Director, BIMTECH. Highlighting the need of a a higher purpose debate on the existence of Think Tanks in India and their roles and influence, Prof. Sinha and Dr. Chaturvedi invited a debate on definition of Indian Think Tanks, evaluating the impact of Think tanks on public policy, defining future trajectory and likely role of these institutions, and identifying challenges faced by the think tanks for attaining growth and excellence.
Following questions were posed before the particiapnats:
1. How to define the contours of Think Tank in India ?
2. How does it differ from its counterparts in the West?
3. What are the challenges before it?
4. What are the basic problems before it?
5. How does and much the source of resources influence policy articulation ?
In his welcome note he expressed his gratitude to all the dignitaries, and specified that there is not as such any platform in India which could bridge the gap between the India’s think tank and the policy makers, therefore BIMTECH in its joint imitative with IPF is working in that direction to create a platform.
Opening the discussion, Prof. Shettigar expressed his concern for the ineffectiveness of think tank in India to contribute to policy level debate however also underlined the challenges and domain knowledge. Some of the experts recognized that absence of financial independence may be a prime cause for their ineffectiveness. Nonetheless over the period there has been an increasing role of think tank in policy making therefore the intellectuals should free from biases and they should give their advice independently.
Discussion was initiated by Chapal Mehra, Global Health Strategies presented his views and identified definition, structural issues, funding and research influence as some of the major issues. The entity is still not much effective as the policy used as a tool for creating popular acceptance of or giving legitimacy to regimes, both at the central and state levels. Policy formation is also highly centralized, dictated by the concerns of political agendas which leaves very less space for Think Tanks in India. Dr. AbuSaleh Shariff, Chief Economist of NCAER raised issues of credibility of the organisations and also the issues of funding and providing the appropriate space to do independent research. Baldevbhai Sharma , Editor of Panchjanya, discussed about the dominance of elite class in think tanks and asked for a real field work by the Think Tanks in India and raise the voice of common man.

particiapnts were of the view that the inputs of Think Tanks have been about the capacity of human resources in the domains, funding on the researches by national and international organisations, influence by other methods of researches or presentations to policy makers, creating credibility which can be disassociated with funding, and the larger issues like absence of a defined mechanism of making the public policy. The critical instances of Nuclear Policy, reservation Policy, Education Policy and associated Economic Policies were offered as examples during the discussion; by Dr Rajendra Mamgain Indian Institute of Dalit Studies, Ms P N Vasanti, CMS; Dr P K Chaube, IIPA; Mr Samir Saran and Mr Nandan Unnikrishnan, ORF; Milind Chakravorty, SHarda University, Avanish Kumar, MDI, Harsh Singh, Writer, Dr Rajiv Nayan, IDSA, Sh Gopal Agarawal , Economic analyst, Milind Oak, social activist and thinker, Dr A K Roy, economist , Dr Karl Grischow, AmericanFoundation and many other dignitaries.

The initiative by IPF and ICPP was appreciated as there has not been such debate in such a diverse group. Prof N N Sharma and Prof Rahul Singh presented the background of the research project on Think Tank and informed two more such brainstorming wouold be organised in Banglore and Patna.