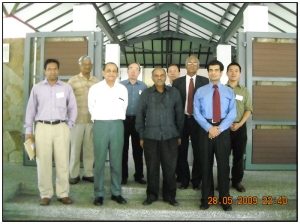 The Observer Research Foundation (ORF), New Delhi and the Institute of Southeast Asian Studies (ISEAS), Singapore held their Second Dialogue on 28-29 May, 2009 in ISEAS campus, Singapore. The theme of this year seminar “South and Southeast Asia: Responding to Changing Geo-Political and Security Challenges”, aptly reflected the rapidly changing economic and security situation with immense implications for South and Southeast Asia. The two-day seminar covered a wide range of issues affecting the region.

The first session dealt with the major power dynamics in South and Southeast Asia. Amb. Dilip Lahiri’s paper analysed the changing role of major powers in South Asia. He concluded his paper by suggesting that the US and India together with Japan, ASEAN, Australia and ROK may find their interests converge which may also ensure the peaceful and non-threatening rise of China in the region. In his paper, Mr. Daljit Singh examined engagement of major powers with Southeast Asia. The paper argues that ASEAN has promoted a “benign regional order” with the major powers. In the context of the rise of Asian powers and the dominant power of the US weakening, the possibility of increasing contestation among major powers looked likely if not managed effectively.

The second session of the seminar discussed the rise of Asian maritime power and its implications on Southeast Asia. Adm. Premvir Das’s paper on India’s maritime security underlined the emerging traditional and non-traditional threats. He argued that India’s maritime security interests have assumed increased importance and serve to secure India’s role and economic interests even beyond the Indian Ocean. Dr. Vijay Sakhuja’s paper examined the rise of China as a maritime and naval power from a historical perspective. He argued that the growth of China’s maritime economy will add to the country’s power potential.

The third session dealt with the security issues in Southeast Asia. Dr. Ian Storey’s paper on the South China Sea dispute reviewed the developments and their implications since the 2002 declaration on the conduct of parties and suggested that the dispute may well take centre-stage if the recent trends were any indications. The paper by Dr. K. Yhome analyzed the changing dynamics of external power interactions in Myanmar and their implications. He argued that while the international divide seemed to be narrowing down at the political level, economic and strategic cooperation among external powers in Myanmar looked unlikely in the current geopolitical context.

The fourth session examined the evolving Asian regionalism. Amb. Rodolfo C. Severino’s paper discussed regional institutions such as ASEAN, ASEAN+3 and AFR in East Asia and stressed the point that these institutions need to be strengthened to deal with regional security and non-traditional security issues. In his paper, Prof. K. Kesavan analyzed the role of regional institutions in India’s “Look East” policy and argued that New Delhi’s look east policy was a response to cope with the new challenges in the aftermath of the Cold War.

The fifth session explored the non-traditional security challenges focusing on climate change and its implications. Mr. Samir Saran provided an interesting perspective on climate change and security in South Asia. By redefining climate as “the operating system” for other elements/threats, he argued that there was a need to acknowledge climate as a variable in any emerging security paradigm. Dr. Lee Poh Onn’s paper examined the implications of climate change for Southeast Asia. Basing his argument on some reports he suggested that Southeast Asia has observed impacts of climate change in water resources, increases in temperature as well as health issues.

The papers generated interesting and fruitful discussion and debate thereby opening new perspectives in understanding the issues confronting South and Southeast Asia. The papers presented at the seminar will be compiled into a book for publication.